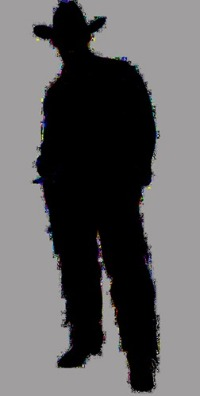 A 2,000 word Western short story, written to challenge myself in a genre I don’t normally write or read.

A swirl of dust circled James in its dry embrace.  The bottom of his long leather duster snapped in the breeze as brittle tumbleweeds crashed into his legs.  He turned and looked behind him, shielding his eyes from the blistering noon-day sun.  Clay stood only a few feet away, his weathered face streaked and flaked with dirt.  His thumbs were hooked through his gun belt, his jacket brushed off to the side.  A hint of silver gleamed off his revolver.

James spat out a stream of chaw then wiped away the droplets of brownish fluid from the bush of hair that hung under his nose and chin.  He pushed open the swinging doors to the saloon and stepped inside.  Loose bits of rock crunched under the soles of his boots and his spurs jingled with each step.

Last evening’s hazy cloud of cheap sex and cheaper alcohol still hung thick in the room.  A drunk lay still in the corner, his motionless face planted on a table in a puddle of his own drool.  His compadre, seated across from him, clutched the edge of the table to stop the room from spinning.  He swayed in his seat like a stalk of wheat waving in the strong western winds.

On the opposite side of the room a sporting gal sat atop a piano, her leg exposed to mid-thigh from under the frilled layers of her dress.  A wide-eyed man was seated in front of her, his arms comfortably folded behind his head and the back of his chair tilted against the wall.  She reached down and lightly brushed his thigh then pressed her fingers against her lips to suppress a seductive giggle.

Behind the bar stood a sheepish looking bartender – all of five foot nothing.   He acknowledged James and Clay with an upward tilt of his head then shifted his eyes to the man standing in front of him.

“There he be,” Clay said, narrowing his eyes.  His index finger pointed like a crooked arrow at the man dressed in black.  “The fancy man at the bar.”

“Hmmphf,” James snorted.  He spat on the wood-planked floor then smeared the puddle under his boot.  “Let’s get movin’.  No doubt the Sheriff will be sniffin’ around here soon.”

James swiped his dusty coat over the grip of his revolver and slowly stepped forward.  The stranger in black shot them a sideways glance then turned his attention to his drink.  He tipped back a shot of whiskey and closed his eyes as he swallowed.  James stopped on the stranger’s right while Clay backed his elbows onto the bar on the man’s left.

“You Emmett?” James asked.  “Emmett…, ah.”  James opened his hand and circled it in front of him as if waiting for the stranger to offer him something.

The man rapped the shot glass on the bar and nodded at the bar tender.  He tipped it slightly and flicked the small glass with his finger.  “That’s me,” Emmett replied, never looking at James, “and I’m not in the business of selling my last name.”

“Fine,” James replied.  “That’s fine.  I haven’t a need for it anyway.  I’m James T. Harwell and my friend over there is Clay Daniels.” Emmett glanced over his shoulder at Clay, sizing up his portly, sweat-soaked frame.  “We were told you’re a gun for hire.  The man I need to speak at to get a job done.”

“Depends on the work,” Emmett replied as he cocked his head to the side, looking at James for the first time, “and how much you plan on paying me.”  Emmett’s pale blue eyes were piercing cold, his skin a pasty white.  His face was a road map of scars; his nose appeared to have been broken more than once and in more than one place.  He was dressed entirely in black and white, like an advertisement in a newspaper.  His clothes were neatly pressed, washed clean and still carried the hint of soap.  A single Colt .45 rested in a holster on his right hip.

Clay cleared his throat to draw Emmett’s attention.  He removed his hat and wiped the top of his balding head with the sleeve of his jacket.  The remains of his thinning hair were matted against his head like black, snaking wires.  Sweat trickled down his forehead and over his rounded cheeks creating small flesh colored paths through the layers of dirt.  Clay reached into his jacket and produced a fistful of green bills.  He counted each one out on the bar, licking his sausage-like fingers after each flick of a bill, until the total reached five hundred dollars.  “That’ll be all yours,” Clay said.  He drove his finger onto the center of the stack of bills like a pudgy spike.

Emmett peered at the money and ran his tongue across the front of his teeth.  “What do you need me to do?”

James combed his fingers through his thick, twisted beard.  His eyes rolled to the cash then back to Emmett before he spoke.  “I need you to kill the Sheriff.”

Emmett laughed and tapped his shot glass on the bar.  “You want me to kill a man of the law?”  He widened his eyes and slowly shook his head.  “For only five hundred dollars?”

Emmett turned and spoke at Clay’s hand.  “You best remove your fingers from my arm, friend.”  Clay paused for a moment considering, then loosened his shaky grip and hooked his thumbs back into his gun belt. “I don’t kill men of the law,”  Emmett continued.  “Not for five hundred dollars.”

James turned away and spat, then tugged on his salt and pepper colored beard.  “I’ll double it.”

“Now you’re talking,” Emmett said as he arched an eyebrow.  “Why’s the law hunting you down?”

James pursed his lips and shook his head.  “He ain’t.”

Emmett tipped back another shot then wagged his finger at James.  “Seems kind of strange to me that you want the Sheriff dead if he isn’t after you.”  Emmett leaned forward, stopping only inches from James’s face.  “I don’t take jobs if I don’t have all of the information.  Tell me why you want him dead, or we won’t strike a deal.”

“I killed one of his friends,” James replied behind a black scowl.  His breath reeked of tobacco and infection.

“I need the name of the person you killed,” Emmett said, “and why you did it.”

Emmett shrugged his shoulders and turned back to the bar.

James blew out a toxic sigh.  His tongue flicked around his teeth fishing out loose pieces of chaw.  “Lincoln Cox was his name.  We had a disagreement about his land.  I wanted it.  He didn’t want to sell it, so I killed him.”

“Cold blooded murder of a man that’s friends with the Sheriff.  Not so smart if you ask me.”

James brushed off Emmett’s comment.  “A man’s gotta’ do what he’s gotta’ do.”

“I suppose,” Emmett said.  His absent gaze was locked on the bottles lining the shelves behind the bar. The rays of the sun lit up the glass, casting dancing colored rainbows against the dark wood.  “Did he have a family?”

“You gotta be kiddin’ me,” Clay said as he swiped the sweat from his brow.  “You got a thousand dollars to do a job.  Take it or leave it.”

“Fair enough,” Emmett replied calmly as he walked past James.  A cloud of dust billowed as he patted James on the shoulder.  “Good luck to you then.”

“Jesus, Emmett,” James grunted as he grabbed Emmett’s arm.  “Hold up.”  Emmett stopped then shrugged off James’s grip.  James talked as he combed his fingers through his beard.  “Yeah, he had a family.”  There was a long pause before James continued.  “I killed ‘em all.  His wife, his kids, even his fuckin’ livestock.  Bullets in all their heads.  Is that what ya were lookin’ for?”

“It was.”  Emmett’s eyes burned with a pale blue fire.  “I just needed to know the type of man I’m working for.”  Emmett sat down and folded his arms on the bar.  “Why don’t you just kill the Sheriff yourself?”

“He can’t prove nothin’,” James replied.  “Least not yet.  If I get the Sheriff’s blood on my hands, they’ll hang me for sure.  If he gets dead by someone else, I go free.  It’s cleaner this way.”

“Fifteen hundred,” Emmett said licking his lips.  He held his hand out in front of James, his palm faced up. “Fifteen hundred and we got ourselves a deal.”

James snorted, adjusted his collar as he twisted his neck, then nodded to Clay who pulled out a fresh stack of bills from under his coat.  Clay licked his fingers and added another thousand dollars to the teetering stack of green.  James scraped it off the bar and slapped it into Emmett’s hand.

Emmett sniffed at the cash as he fanned it under his nose.  He smiled, rolled it up and slipped it into his pocket.  “I’ll take care of the problem before tomorrow’s sunrise,” Emmett said as he stood.  “Have yourselves a fine day gentlemen.” Emmett nodded at both men and walked to the back exit.

“Lookin’ like you won’t have to wait,” James muttered under his breath.

The saloon doors swung open, announcing the entrance of a visitor with their rusted groans.  Emmett paused, sucked down a breath and turned.  The Sheriff stood in the entrance, the scorching sun bathing him in yellow.  They both stared quietly; Emmett’s eyes focused on the sliver of wood the Sheriff rolled between his lips.  He noticed the Sheriff’s fingers flexing at this side – open, closed, opened, closed.

Clay and James stood between them, comfortably off to the side with their backs pressed against the bar.  James squinted in Emmett’s direction, urging him, willing him to do the job he paid so handsomely for.

Emmett drew his pistol, his hand was a blur.  The crack of two bullets rang out, a wisp of white smoke snaked from the barrel.  Emmett seated his pistol back in its holster before a heavy thump rocked the floor.

Emmett tipped his hat in the Sheriff’s direction as a second thump rattled the empty glasses on the bar.  “Sheriff.”

The Sheriff raised his chin and looked down at Emmett.  He pulled the whittled toothpick from his mouth and casually flicked it aside.  “Your brother was a good man, Emmett Cox,” the Sheriff said as he wound his hand around the grip of his pistol.  “He wouldn’t have wanted it this way.”

“Maybe, maybe not,” Emmett replied.  He considered the motionless bodies of Clay and James as he rubbed his chin between his thumb and index finger.  “Maybe these boys can ask him for us?”

“I can’t let you leave,” the Sheriff said as he sidestepped the growing pool of red.

“I just did us all a favor,” Emmett replied.  He turned his back to the Sheriff and walked to the back door.  “If you put a bullet in my back, you’ll do one for me.”

The lonely creak of the door was swallowed up by the saloon’s deafening silence.